Wednesday, December 09, 2015: Well, I must admit that since I got my latest PC back in 2012 that I have not been running the SETI/Boinc programs.

Here are my current stats for SETI@Home BOINC running on the BOINC (Berkeley Open Infrastructure for Network Computing) platform and SETI@Home Classic:

I guess one of the main questions this raises: do I believe in extraterrestrial life forms? Well.. why wouldn't there be? To paraphrase a line from the movie Contact, it would be a big waste of space if there wasn't. The universe is just too vast I feel for there not to be. Having said that, then I guess running SETI is somewhat of an unnecessary thing. Still, having definitive proof of its existence would certainly be profound. I wonder what we would do if a signal was found. From a practical stand point we won't be able to communicate with a civilization that's many light years away. If we sent them a message, everyone currently alive would be dead by the time a response came back. Obviously that's not the goal of SETI, but to merely prove that we are not alone in this universe.

Do I believe in UFO's? A more appropriate question would be: Do I believe we have been (are being) visited by aliens? Well.. I have an open mind about it. There is compelling evidence for this being the case based on the number of documentaries I've seen on the subject and how long UFO sightings have been occuring, even apparently during biblical times: UFO's and the Bible (link removed, page gone). Then there's things like the Nazca Lines (Info) that makes one wonder. But as this article from the Skeptics's Dictionary points out, they are probably not extraterrestrially inspired. Still.. if you can only see the patterns from the air, they must have been created for some airborne audience. Maybe they were just making the drawings for their ancestors that now dwell amongst the stars to be able to see home and recognizable creatures (I am just speculating here).

If an alien spacecraft landed and an alien came out.. if it were anything like us, we should probably destroy them on the spot. The Indians would most certainly have been better off if they had done so upon seeing Columbus and others land in the new world. Between wars, manifest destiny, and introduced diseases, most cultures of the Americas were either wiped out or very nearly so. Also, who's to say we wouldn't be seen as just a food source to some alien species? I would hope that no alien species would have these motivations towards us; however, it is always a possibility. I think it would be naive to think all intelligent alien species would be good/beneficial, but some probably are. I guess one should keep a suspicious eye open.

While I tend not to believe in this phenomenon based on what I've seen on the subject, it is something that to me is entirely plausible and to an extent expected behavior from an advanced alien species. I mean.. what do we do to lower life forms? We bag'em and tag'em and dissect them to see what makes them tick. Why wouldn't any sufficiently advanced alien species be any different?

I have added these and all other certificates to a new Planetary Society and SETI Album at my Gallery.

Following is a certificate from the Planetary Society showing that my name appears on the Phoenix DVD, part of the Messages from Earth project. 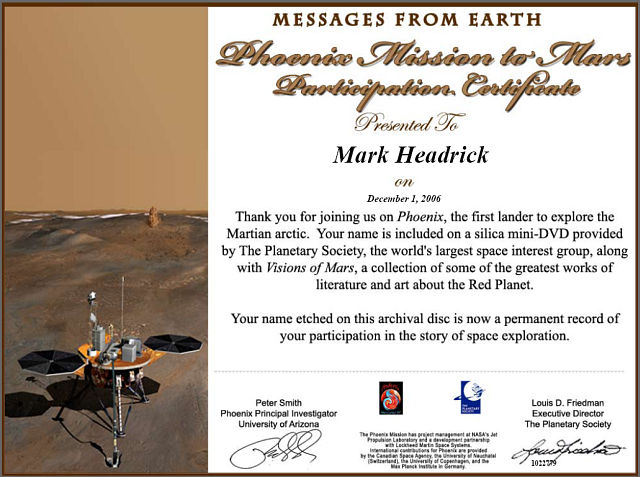 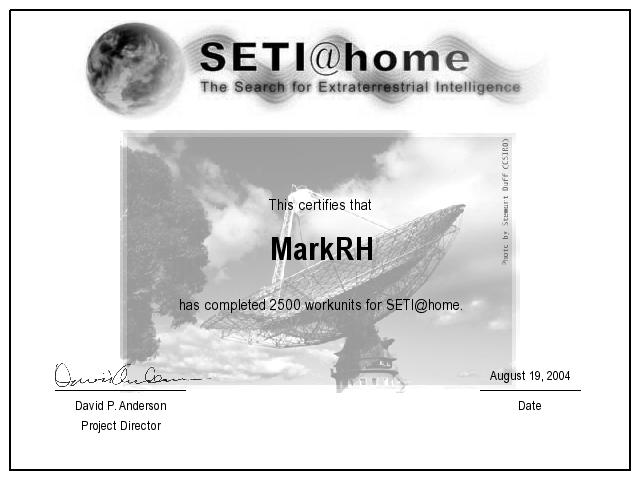